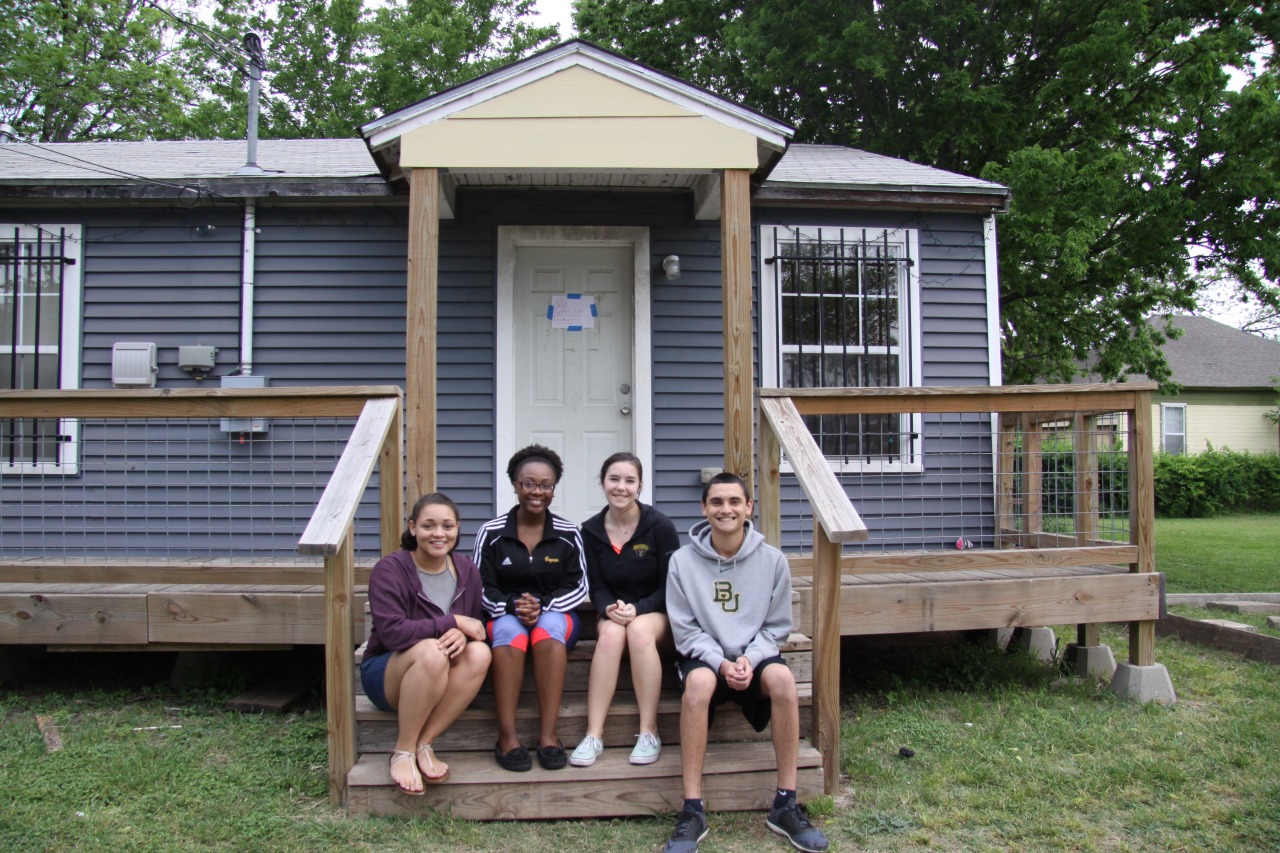 As a freshman, Destiny came to Baylor with a passion to serve. Throughout high school, she was the president of the National Honors Society and was always setting up and leading service projects. Coming to Baylor, she couldn’t let her passion for volunteer work go to waste, and when she found out about Urban Missions at Late Night, she decided to check it out. She knew she wanted to work with kids, and the “Blue House” Urban Missions team provided her with an opportunity to both hang out with kids and focus on their education. The Blue House was started many years ago by Crossroads Fellowship Church. In the Blue House, they host regular programs for children and their families. Destiny leads Urban Missions’ partnership with the Tuesday and Thursday evening programs, which focuses on helping kids with homework and playing educational games, all while building relationships with the children.

Destiny described her first day serving at the Blue House to me:

“I was nervous,” she admitted. The Blue House has many rooms, splitting the kids up into age groups—little ones through high school. That day, she walked around the house looking into rooms, trying to decide what age group she wanted to work with. She had already made up her mind that middle school was out of the question. But as she walked by the middle school room and peeked in, a little girl yelled at her, “Are you afraid to come back here!?” “I couldn’t show her that I was!” Destiny said, “So I went into the room and have been there ever since.”

After being at the Blue House with the same children for four years, Destiny has been able to form relationships with the children. Where before they would try to intimidate her, now they embrace her and enjoy having her come. “If you miss a week, kids are asking where you were,” she explained. “They’ll say, ‘I was waiting for you!’ or ‘I was here on Thursday and you weren’t!’” The kids are a big part of what keep her coming. Destiny has a big heart for the Blue House group because she shares a special connection with some of the kids there. She talked about how most of the kids she works with are growing up in government housing, and as a kid, she also lived in government housing. “Growing up, I would have loved having older people coming and showing me that I can succeed, that there’s a better life,” Destiny explained.

Destiny has also recognized the importance of long-term service and commitment to effect change. Over the past four years, she has seen a lot of growth in the children. She told a story of an Easter egg hunt her team gets to do with the children each year. One year, a little girl ended up coming late, and all the Easter eggs were gone. Without prompting from the student leaders, the other children rallied together and collected eggs from their own baskets, making sure the little girl didn’t leave empty handed. “These kids would not have done that eight years ago before the program started,” Destiny said. Seeing this happen affirmed to her that she and the other volunteers were actually making a difference in the kids’ lives, even when they don’t always recognize it.

Most of what Destiny does with the Blue House group is focus on education—another one of her great passions. Destiny talked about how education is so important to guarantee success for these children. Since serving at the Blue House, Destiny has become much more passionate about education and helping these children with homework. She said since getting involved, she has had more of an urge to speak up about developing education and finding more funding for public schools. “If we just fix education, everything will get better,” she said, “because education creates more intelligent citizens.” Destiny’s experience as a student at Baylor has also helped to shape these passions. “The University makes you a more well-rounded person,” she said. “You come into contact with people of different religions, races, and cultures. They’re sitting right next to you in class, and you have to get used to it and learn how to relate with them.” The focus the Blue House Team puts on education is extremely important to Destiny. “We’re teaching them to work, then play,” she explained. Through this, they’re teaching the children to prioritize their education over other activities.

Through Urban Missions, Destiny has seen God at work in her and in the lives of the children she works with. She has felt God give her patience when the children are difficult to work with, and has seen the reward of her service through the growth in the children. Destiny’s passion comes from moments like that. “You’re going to be living in this area for at least four years,” she said, “why wouldn’t you want to sew good seeds in the area that you’re living?” Destiny explained how she sees the goal of Urban Missions: “We reach out to people that are right here next to us. We live in a ‘Baylor Bubble,’ but right next door is poverty. We try to pour into the kids as best as we can, but also let them affect our lives.” She explained that you don’t have to go far to be a part of Missions. “Kate Ross is literally right across I-35; you can get there in two minutes,” Destiny said. “If you don’t start now, you’re never going to. If you want to start living that life of service, step out your front door, and it’s right there.”

If you are interested in serving alongside Destiny and her team at the Blue House, click here to learn more. For information about ALL of the Urban Missions experiences available this semester, visit our website.