Welcome back to Cataloger’s Corner! In my second article for this series, I’d like to tell you about an amazing book The Texas Collection purchased last year: the first Italian edition of Francisco López de Gómara’s account of the Spanish conquest of the Aztec Empire, La Historia Generale delle Indie Occidentali, from 1556.

Gómara became the private chaplain of famed conquistador Hernán Cortés in 1540. This relationship gave him easy access to other Spaniards who had traveled to Mexico with Cortés. In 1552, he compiled interviews with these explorers, as well as manuscript accounts written by missionaries and Caribbean governors, to form the book Primera y Segunda Parte de la Historia General de las Indias. The work was extremely popular and had at least 50 editions in Spanish, Italian, French, and English through 1600.

However, Gómara’s contemporaries strongly criticized the book. Prominent writers like Bernal Díaz del Castillo, who had been a soldier under Cortés, thought Gómara focused too much on his former boss without giving due credit to others involved in the campaign, and Friar Bartolomé de las Casas thought he glossed over the atrocities Cortés committed against indigenous peoples in the Americas. Even the Spanish Crown found fault with the book, perhaps for its criticism directed against Queen Isabella and King Ferdinand, and Philip II officially banned its publication in Spain in a 1553 decree. However, copies in Spanish continued to be printed in Antwerp and Rome throughout the 16th century. The publication ban was formally ended in 1757. 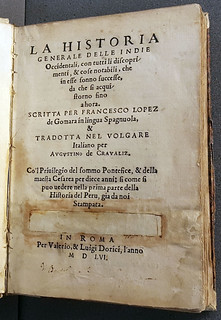 The Texas Collection’s copy of the Historia is no longer in its original binding, but the pages are remarkably clean with only a hint of water damage. At some point, a former owner or bookseller put a strip of paper just above the publication statement on the title page. My guess is that a fancy filigree or other kind of illustration was cut out of the book, and someone filled in the hole to minimize further ripping or stress to the page.

The text is set in italic type, a cursive font based on 15th and 16th-century calligraphy. Today we only use italics to emphasize part of a text, but it used to be used throughout books. 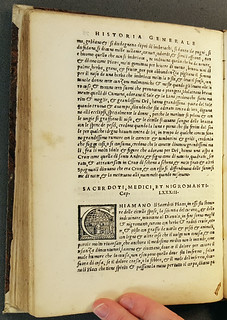 This image showcases the lovely initials used at the beginning of most chapters. Each letters has an architectural background, some of which are identifiable buildings while others are more generic.

If you look in the bottom right corner of the page, you will see evidence that a bookworm has been in this book. Yes, bookworms are real—but the term can refer to any insect that bores through books. Cloth bindings can attract moths, while certain varieties of beetles will attack leather or wooden bindings. Tiny wingless bugs of the order Psocoptera feed mainly on mold and other organic material found on the pages of books. These insects are more likely to be a danger to books that are housed in damp, humid spaces, which is why the special collections librarians at Baylor are so strict about climate control in the libraries. 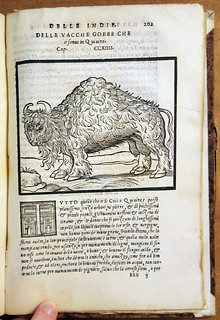 One of the most important features of this book can be found on page 202: an early image of the bison. (According to research done by Gunter Sehmi, the earliest European illustration of a bison was found in the first edition of Gómara’s book.) Interestingly, it is the only illustration in the entire book and comes before the chapter “Delle vacche gobbe che ci sonno in Quivira,” or “On the humpback cows that are in Quivira.” The explorer Francisco Vásquez de Coronado led an expedition north from Mexico to search for the mythical “Seven Cities of Gold;” when he failed to find them, he instead turned east to look for a wealthy civilization the Pueblo Indians called Quivira. However, when Coronado finally reached it, he was unable to find any gold. The exact location of this settlement is uncertain, but historians and archaeologists think it was likely in central Kansas.

If you’d like to read the original Spanish text of this book in a modern edition, you can find it in Moody Library at Baylor University. To find other early descriptions of the Americas held by The Texas Collection, follow this link.

iSehm, Gunter G. (1991). “The first European bison illustration and the first Central European exhibit of a living bison. With a table of the sixteenth century editions of Francisco López de Gómara.” Archives of Natural History 18 (3): 323-332.