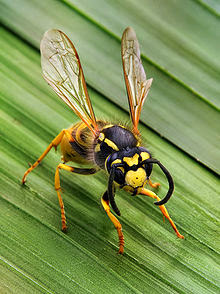 Yes, I got stung on Saturday morning by a wasp–some sort of paper wasp, I think. Nailed me right in the leg. The pain is also accompanied by a burning sensation that reminds one that wasps are dangerous. Now, I’m rather fortunate in that I am not particularly allergic to bee and wasp stings, but others might not be so lucky. The little devils just love to build their little paper constructions in the most annoying places, such as under my back patio table. They are both persistent and fast, and before I knew it, I was stung and running for my life. You see, wasps, unlike bees, can sting you multiple times because their stingers are smooth, and it does matter how many times they sting you. A single sting for me is more of an annoyance than anything else, but I did take an antihistamine and put hydrocortisone on the sting sight. It hurt for awhile, no question. The question of cohabitating with these dangerous insects, even though they pollinate to a certain extent, is highly problematic because I won’t do it. I got out my can of wasp spray and killed the little interlopers–end of story. I don’t understand their role in the world, they are dangerous, and they build their nests in inappropriate places which pose a real danger to all–people, pets, and other animals. This was not my first tangle with wasps, nor will it be my last, I’m afraid. The whole experience was extremely distastful because I hate killing things.