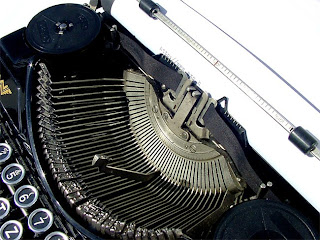 I won’t call it keyboarding–I’m too old for that. I learned to type on a small portable Remington while working at a small 100 watt am radio station near Minot, North Dakota. There was really nothing else to do, so I learned to type, even though I had nothing to either write or say. Some might say that is still true today. What I liked about typing was the physicality of punching the keys and watching the letters appear on the paper–an actual piece of blank, white paper–without looking at my fingers or the keys. I developed the same muscle memory that piano players had, but instead of 88 keys, I only had 52, each key was identified with a letter, not a note. I couldn’t play cords, but I could write words in spite of knowing little and saying less. Banging on the keys of a typewriter in order to pound out an essay on post-structuralism is really more satisfying that most existentialists understand. The physical action of punching down the key with one of your fingers give one a very personal connection with the written word. I don’t get that same feeling from contemporary electronic keyboards found on most laptops or connect by wires or bluetooth to a desktop (which are becoming increasingly archaic, just like me). Kids entering college today may have seen a typewriter, but I’m sure they have never used one. Typewriters, along with rotary telephones and cathode ray tube televisions, are relics of the past, inventions that have been dumped on the ash heap of history along with cassette players, eight-track tapes, and 35 mm cameras that still used film to take pictures. A pity.