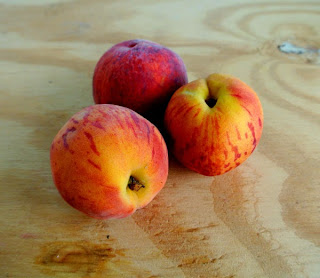 I don’t mean to be snarky about this, but supermarkets are experts at presenting perfect fruit for sale that has neither flavor nor juice, which is essentially inedible. So they have perfected the sale of the perfect peach or pear, but since it was picked green, it has no discernable flavor or character. In other words, the pear, peach, or tomato looks perfectly ripe, has no real flaws or damage, but it also has no flavor, other than a sort of woody fibery sensation you get from chewing this fruit. You should spit it out, but you are torn because you did waste your hard-earned money buying it. I mean, who wouldn’t buy a perfect peach? Thing is, however, that because the modern road from orchard to market is so hazardous, the producers pick the fruit green, let it mature in route, and then sell their perfect creations at a nice high price. The consumer gets the short end of the stick because they don’t sample the pretty fruit before they buy it–I mean, who cuts into a peach in the middle of the produce section? I have bought an entire box of strawberries that not only don’t taste like strawberries, they have no discernable taste at all. The peaches are the worst because they look awesome, but they taste like oak. I just ate a pear that was really only the ghost of a pear. I know as a kid we used to buy entire crates of peaches and pears in the summer, and they were juicy and wonderful. You would think that with modern technology, great refrigeration, and fast trucks that this would be possible. At least, you might think that. Nostalgia is a terrible thing. And so is bad fruit.