I have held the Frank S. Groner Memorial Chair in Finance since September 2002, and I am honored to be the first and only Baylor faculty member ever appointed to this chair.  A short biography of Dr. Groner appeared in the Winter 2009 issue of Baylor Line, which I reproduce below: 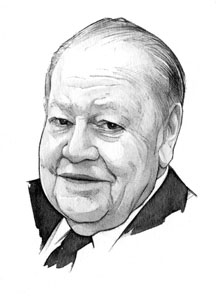 When he became president of the South’s largest hospital in 1946 at the age of thirty-four, Frank Groner knew what he was getting himself into. “It was rather evident that it was going to be a tremendous growth industry and it was going to be exciting,” he told the Line when he was named a Distinguished Alumnus in 1983, predicting that the industry would remain an exhilarating milieu in which to work.

Groner came to Memphis’s Baptist Memorial Hospital (BMH) after ten years at the Southern Baptist Hospital of New Orleans. Under his leadership as president until 1980, BMH grew from five hundred beds to more than two thousand and was ranked as the world’s largest private hospital.

A 1934 Baylor graduate, Groner pioneered many hospital trends. When the hospital built a 450-bed addition in 1953, 88 percent of the new building’s rooms were private—unusual for the time. Also that year, BMH was the first hospital in the nation to put televisions in patient rooms. Groner was credited with introducing piped oxygen into surgery, installing the first automatic elevators in a hospital, pioneering the nurse-patient audio call system, and starting a one-day surgery program.

He also was a leader on a national level through his support for the concept of prepaid health-care plans and his involvement in the national development of Blue Cross. Groner was also an early pioneer in diversification; BMH already had a for-profit arm when Groner arrived, but he grew the investments into a wide array of assets to earn for the hospital.

Groner was the only person to receive the top three national awards in the field of health care: The Justin Kimball Award in 1964 for his work with Blue Cross, the Distinguished Service Award from the American Hospital Association in 1966, and the Gold Medal Award from the American College of Hospital Administrators in 1968. When Modern Healthcare magazine launched its Health Care Hall of Fame in 1988, Groner joined the likes of Benjamin Franklin as one of ten leaders (only two of whom were living) who were charter inductees.

Born in Stanford, Texas, Groner was one of seven children, but his family soon moved to Waco, where his father became pastor of Columbus Avenue Baptist Church and led efforts to build what is now Hillcrest Baptist Hospital. Later the family moved to Dallas, where his father was general secretary of the Baptist General Convention of Texas and Groner was a high school football standout. At Baylor he also played football, but became known better on the baseball diamond, where he earned all-conference honors.

When the U.S. entered World War II, Groner had already made a name for himself in New Orleans and was asked to inspect military hospitals in the Pacific theater. But a subsequent back injury prevented him from going overseas. Staying stateside, he became a pioneer in a field which, as Groner predicted, has stayed exciting to this day. He served as president emeritus of BMH after his retirement and died in 1994.