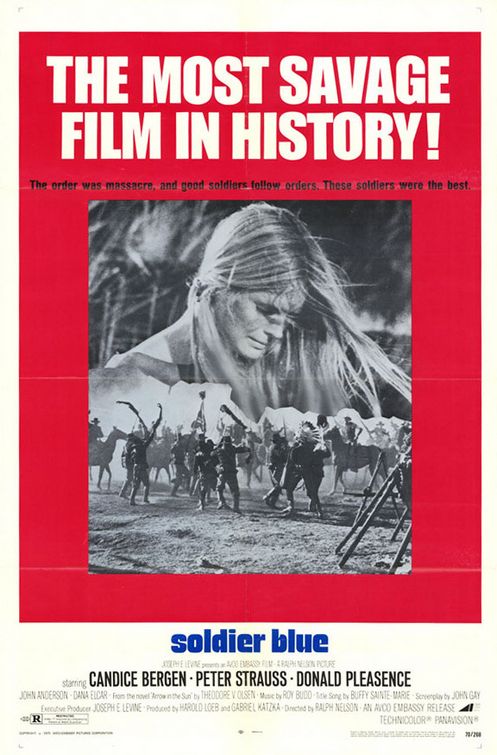 This isn’t related to probably anything we will discuss in class regarding Computer Lib / Dream Machines, but in my routine background research on Theodor H. Nelson I discovered that he is the son of Ralph Nelson, a Hollywood filmmaker with a tendency toward rebelling against the system, a trait he seems to have passed down to his son. Ralph Nelson’s cinematic career began in they heyday of television in the 1950s, where he directed live anthology dramas, the best being 1956’s Requiem for a Heavyweight, before moving into feature films. In 1970 he directed Soldier Blue, a now largely forgotten western (or, more specifically, anti-western) that used the genre as a thin metaphor for the situation in Vietnam, especially the recently reported My Lai massacre. At the time, Soldier Blue was excoriated for its graphic levels of violence, although more to the point it was feared because it inverted the conventional moral spectrum of the genre by turning the cavalry into a bloodthirsty mob and depicting Native Americans as peaceful victims betrayed by the stars and stripes.

Of course, that all has little or nothing to do with Theodor Nelson’s work, except that his father’s rebellion against cinematic codes and traditional historical narratives is reflective of the son’s visceral sense of liberation and populism when it comes to the computer. In the age of personal computers–where many of us walk around with a more powerful personal computer in our pocket than we had on our desktop a decade ago–Nelson’s plea to free the machine from the clutches of computer scientists and engineers and put it in the hands of the masses is a no-brainer. But Nelson was writing in a different era, one in which the social, professional, and personal roles the computer would play were hardly set. His ideas about how computers can be used pedagogically reflect in many ways the current uses to which machines are put in the classroom, although his fears about their becoming another cog in a lock-step form of teaching still seems to happen.

As I read these pieces, there was part of me that just kept thinking, “He gets it.” And what is amazing is that he “got it” so much earlier than so many others. Probably the most pertinent point he makes is early in Computer Lib when he rhetorically asks why any of this matters, to which he answers: “It matters because we live in media, as fish live in water.” All I can say is … exactly.

2 thoughts on “Of Anti-Westerns and Fish Bowls”