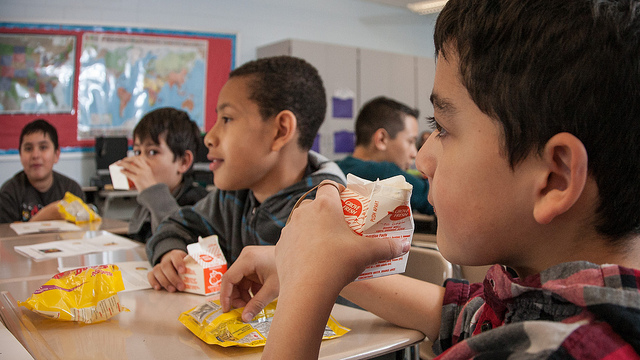 A third grader sits at his classroom desk, tears streaming down his face. He isn’t paying attention to the lesson. “What’s wrong?” his teacher asks with concern. “My stomach hurts,” he replies.

The same scenario plays out the next morning, and the morning after that. His teacher, Shelly Lyles, begins to put the pieces together. “Did you eat today?” she asks.

Hunger is a “huge distraction” in the classroom

Lyles has taught third grade at Fairfield Elementary School in Fairfield, Texas, for nine years. She still remembers that little boy distinctly, even though it has been years since he was in her class.

“He would never say, ‘I’m hungry.’ He’d say, ‘My stomach hurts.’ It was heartbreaking,” she said.

When it comes to childhood hunger, teachers and school administrators are on the front lines. Sometimes, the hunger is easy to spot, but often, it is difficult to see. It takes perceptive teachers. Of course, academic struggles can often be a red flag for hunger in the classroom.

“When children are hungry, they really can’t think of anything else. They can’t focus. They can’t pay attention. It just really affects their learning,” Lyles said. “They don’t have the best learning environment when they’re hungry.”

Jon Coker has been in education for eleven years. He taught for nine years before transitioning into an administrative role. This is his second year as assistant principal at Connally Junior High School, located in central McLennan County.

“I’ve taught in large, urban schools, small, rural schools, and suburban schools, and [hunger] is all the same.” Coker said.  “When they’re hungry, they’re distracted in the classroom, and they’re not ready to work. It’s a huge distraction.”

Hunger in the classroom isn’t a new problem in our country. But in a land of abundance, childhood hunger is unacceptable.

Identifying and confronting hunger in schools

Judy Weeden’s career in education spans more than three decades, as both a teacher and an administrator. In the last three years prior to retiring, she served as a principal. Thirty-two of her years in education were spent at China Spring Elementary School, in China Spring, Texas.

Weeden said that sometimes, especially in her early years in China Spring, she “just wasn’t as aware of how many kids didn’t have food as [she] should have been.”  Later in her career, she noticed that many kids weren’t having lunch.

“I remember at least one occasion, where a child was crying in the cafeteria. I went up to him, and I asked what was wrong. He said he was hungry, and I asked if he had a lunch today. He opened his lunch box and there was nothing in his lunch—nothing. He just took his lunch kit so people wouldn’t know he didn’t have a lunch.”

“I was just so upset. I asked him, ‘Will you eat a lunch if I get if for you?,’ and he said ‘yes.’ So I went up to the cafeteria lady and said, ‘Just charge it to my account.’ I just wanted to make sure this child had a lunch.”

Weeden provided lunches to kids on several occasions, making sure not to make a big deal of it. “It wasn’t very often, but it did happen enough that I knew there were some kids that didn’t have enough.”

Lyles also worked to close the gap when she noticed children in her class who were hungry, particularly the little boy who frequently complained of “stomach aches.”

“I would bring snacks, something like peanut butter crackers or a banana or a pop tart—just a little something to hold him over,” Lyles said.

Lyles said the boy would often hoard what he was given and also steal food from other students.

“If he went to the bathroom, he would get into other people’s lockers and steal their food. It’s hard, because they have to be punished when they do that, but it’s understandable when they’re hungry.”

Weeden suggests that behavioral issues and academic struggles have many causes, and often it’s not easy to pinpoint hunger as the source.

“Frankly, it’s a difficult problem. Sometimes kids just aren’t paying attention simply because they’d rather not be there—they’re tired. Sometimes they just didn’t take the time to eat early in the morning. It’s difficult to know where to draw the line. So you kind of have to dig deeper. It’s just not obvious,” she said.

In many cases, it takes becoming more aware of what’s going on in kids’ lives outside of school to get to the heart of the issue.

Free and reduced price breakfasts and lunches have helped tackle hunger and the negative side effects that go with it, but barriers still exist, and among them is the stigma of being “the poor kid.”

Programs like Universal School Breakfast and Breakfast in the Classroom, among others, reduce the stigma while increasing breakfast participation rates.

This year, Connally Junior High is offering Universal School Breakfast to its students for the first time. “Everyone gets [breakfast] now. There is still some stigma with lunch, because it’s obvious who has to pay versus who just goes through the line,” Coker said. “But the Universal program has done some to help alleviate that [at breakfast].”

Coker shared that he has also noticed a difference in punctuality and attendance.

“Before the program was implemented [students who struggle to afford meals at school] knew they couldn’t buy breakfast, so they were just straggling in. But now that they can get a breakfast here, I see more kids coming to school on time, either riding the bus or their parents dropping them off,” Coker said.

“Not having breakfast gets the day started off on the wrong foot. Getting to sit down and eat is a switch,” Coker said. “It signals ‘okay, we’re fixing to start school.’ It becomes a routine, and junior high kids really thrive on routine.”

Eating can really make a difference in children’s performance at school, improving their academic performance, attendance, and behavior. These are the facts that are currently cited in studies and articles. Beyond just these numbers, it can also help a kid have a chance at a happier childhood.

Once the boy with “stomach aches” had his needs met with school meals and other outside assistance, he “became a regular kid,” Lyles said.

“When the fear of not having food was taken care of, his focus was then on school work. He made friends. Before, all he wanted to do was get something to eat. He wasn’t able to focus. He wasn’t able to carry on a conversation,” Lyles recalled. “But once that was taken care of and his physical needs were met, then he was able to move on to developing social relationships and to be able to do his work.”

Teachers and administrators don’t want their students to just survive but to thrive. Their job is to help students reach their fullest potential, and hunger stands in the way of that goal.

“Even if you weren’t concerned about how well they performed in school, you have to be compassionate about the fact that they were hungry,” Weeden said. “You want them to be taken care of like your own kids. They are your kids when you have them in your classroom.”

We at the Texas Hunger Initiative are thankful for the many caring teachers, like Jon Coker, Shelly Lyles and Judy Weeden, who have and continue to creatively confront and overcome hunger in the classroom.

For more information on what schools in your area can do to combat hunger in the classroom, take a look at pages six and seven of the Texas School Breakfast Guide.