Waco, Magnet of Commerce and the Air Mail: the Center of Texas Population. circa 1929.
This beautiful promotional highlights many of the buildings, educational institutions, railroads, industry, production, jobs, etc. that 1929 Waco has to offer. Contained within are many photographs, some of which may not exist anywhere else. The purpose of these promotionals were to sell a city, and this promotional does an excellent job of selling Waco. Click here to view the Bearcat record for this resource!

Souvenir Program: Fort Worth Police Band Fourth Annual Concert. Fort Worth, TX, 1927.
According to this unique program, the Fort Worth Police Band was founded in 1921 by W. H. Lee, Chief of Police. Band members were recruited from within the police department and were conducted by Captain A. Bouton. Filled with photos, advertisements, and additional information about the department, this program offers a fascinating look at Fort Worth’s finest. Click here to view the Bearcat record for this resource! 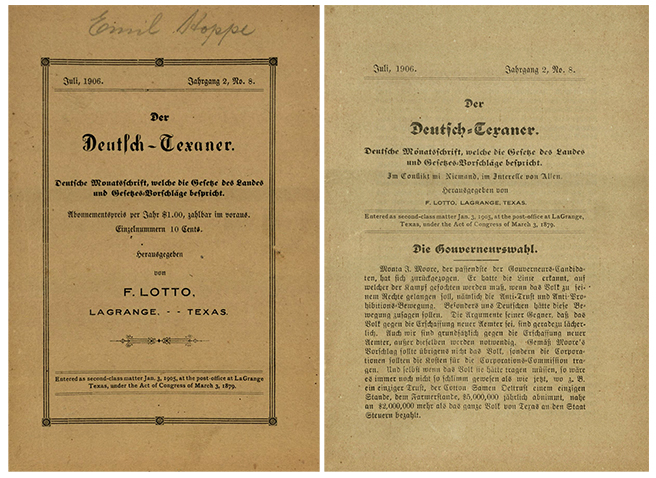 F. Lotto. Der Deutsch-Texaner. 2.8 (1906).
Published in La Grange and written in Fraktur, this periodical was geared toward German Americans in Texas. Not much is known about the origins of this volume, but our copy is one of only three known to exist. Click here to view the Bearcat record for this resource!

On January 24, The Texas Collection welcomed the Texas Jewish Historical Society to a special display of materials on Jewish life and faith in Central Texas. Members of the society viewed many different kinds of materials, including:

All together, The Texas Collection has more than 20 Jewish-related collections available for researchers to explore. Most of these collections are unprocessed, meaning they are not yet described through a finding aid in BARD or housed in modern acid-free boxes and folders. However, two Jewish collections have been processed recently, the De Cordova Family papers 1845-1956 and the Waco Chapter of Hadassah records 1928-2009, and we hope to process the rest of them soon. Stay tuned for more news about our Jewish collections!

The fall of 1936 proved to be a devastating season for the city of Waco. In September, one of the city’s worst recorded floods devastated the town. The Brazos River submerged Elm Street, and water rushed approximately two feet below the suspension, Washington Avenue, and railroad bridges near downtown. The end results of this natural disaster were estimated at $1.5 million in damage to McLennan County.

A disaster of a different type was soon to follow just weeks later on October 4. The Liberty Building on Austin Avenue and Sixth Street exploded, fatally wounding 65-year-old janitor Warren Moore and causing an estimated $290,000 in damages to the structure, as well as those adjoining and nearby. Fortunately it happened on an early Sunday morning without the usual hustle and bustle of the busy Waco downtown area, or else casualties could have been much higher. Businesses affected by the incident included the F.W. Woolworth Co., Law Offices of Sleeper, Boynton, and Kendall, Walgreens Drug Store, Pipkin Drug Store, and Goldstein-Migel department store. Other businesses suffered minor damage, and isolated injuries to people were reported.

The Liberty Building’s damages are detailed in a Waco News-Tribune article from October 5, 1936: “With its first three office floors converted into single rooms by force of the explosion Sunday morning, Liberty building showed destruction from its basement to its roof.” The structure next door, F.W. Woolworth Co., suffered an estimated $75,000 in losses due to fire. The law office was located on the fourth floor of the Liberty Building and sustained serious damage. Its law library, including several thousand volumes of books, was its greatest loss. Located on the first floor of the Liberty, Pipkin Drug Store was completely destroyed, and the nearby Walgreens Drug Store suffered heavy damage to its storefront and interior. The images in this post and the slide show below (from the Acree family papers) illustrate the devastation of the blast.

In the aftermath of the explosion, investigators wasted little time searching for the cause of such a devastating accident. One initial theory was that the recent Brazos flood a few weeks before had caused a massive buildup of water that overburdened the city’s sewage system. But it was found that the Liberty Building’s location on Sixth and Austin proved to be too much of a distance from the most affected areas closer to the river and across on the east side.

After almost two years of thorough investigation, it was determined by engineers that the explosion was caused by a gas leak from a loose coupling device on a two-inch pipe in the Liberty Building’s basement. Records from gas companies show a surge in pressure around the time of the explosion. Based on some of Warren Moore’s statements before his death, it is believed that a spark from a light switch ignited the gas leak as the janitor turned out lights before seeking assistance with the sudden gaseous odor. Unfortunately, that well-intentioned move cost him his life. (If you smell gas, don’t use or touch anything electrical, and leave windows and doors open or closed as they were—just get out, then get help.)

The building ultimately was renovated, and its neighbors relocated or made the necessary repairs, but these images remain as a reminder of Waco’s disastrous fall 1936.

Click the “play” arrow in our Flickr set below to see more images of the aftermath of the Liberty Building explosion. (Use the crosshairs that will appear in the bottom right corner to enlarge the slideshow.)

This month, we’re introducing “Print Peeks,” a regular feature examining select items from our print collection. Did you know that The Texas Collection has more than 167,000 books and more than 3,000 active serials titles? And that does not even get into our vertical files and other material types. Our first entry looks at one of our Texas newspapers. Enjoy!

From 1892 to 1901, the Artesia was a popular Waco newspaper with a circulation of over 2,500 at its height. As a society paper, the Artesia focused its coverage on social events and comings and goings of Wacoans. A typical issue included columns titled “Happenings of the Week—Movements of People You Know,” with items on the Shakespeare Club, the ladies of Waco organizing the parade for “Street Fair Week,” and reports of the local dinner parties with a list of interesting visitors from Houston and San Antonio.

The paper was founded by a prominent member of the Waco Jewish community, Isaac Goldstein, and thus featured more activities of Jewish organizations of the time than did other papers. Goldstein, along with Louey Migel, owned a successful department store in Waco. Not surprisingly, Artesia’s pages were full of advertisements proclaiming the latest fashions and their availability at Goldstein-Migel. Vital to the Artesia’s publication was Kate Friend, who served as editor. Along with her duties at the paper, Friend was an authority on Shakespeare and an advocate for animal rights, even speaking on the subject in Washington, D.C., in 1935.

The 1900 Easter Artesia was one of the few instances that the Artesia featured a color front and back page. Color printing was a much costlier process and reserved for special occasions. Major holidays such as Christmas and Easter were more likely to be celebrated with full color pages because of the positive feelings associated with the event. (Occasionally, Sunday comic pages might get some red ink, and major news headlines would sometimes be printed in red.)

This Easter edition of the Artesia was published on April 15, 1900, and the content is typical of the publication. Notes from recent club meetings and social gatherings fill all four pages. However, the front and back covers are far from standard. The front cover (see above) features a powerful image of an angel, standing with purpose and eyes fixed upward. The mix of soft Easter pastels with a vibrant red and yellow background is striking. 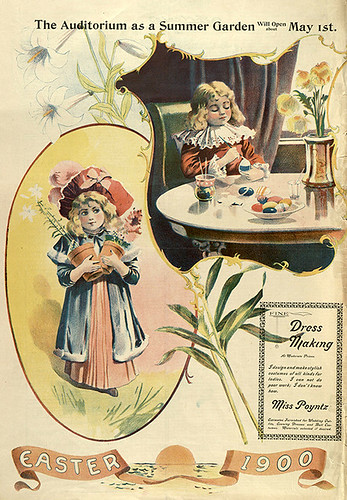 The back cover (to the left) includes festive scenes of children holding flowers and coloring Easter eggs. At the top is an advertisement for the Auditorium as a summer venue for people to come and enjoy the warmer weather. This seems to be a reference to the Auditorium Theater which, according to the 1900 Waco City Directory, was built at the corner of 6th and Columbus and had a seating capacity of 7,000. At the bottom of the page is an advertisement for the self-assured dress maker Miss Poyntz, who proudly claims that “I can not do poor work; I don’t know how.”  Both advertisements seem to be well timed as Waco began to anticipate the summer and upcoming social events.

The artwork featured in this edition of the Artesia is not only beautiful but provides the modern reader with a window in which to view holiday traditions that are more than a century old.

Interested in learning more about the Artesia? We believe we have the full run of the paper, which you can come and peruse in our reading room…among many other newspapers, Texas and otherwise!