Each month, we post an update to notify our readers about the latest archival collections to be processed and some highlights of our print material acquisitions. These resources are primed for research and are just a sampling of the many resources to be found at The Texas Collection! END_OF_DOCUMENT_TOKEN_TO_BE_REPLACED

Each month, we post an update to notify our readers about the latest archival collections to be processed and some highlights of our print material acquisitions. These resources are primed for research and are just a sampling of the many resources to be found at The Texas Collection! END_OF_DOCUMENT_TOKEN_TO_BE_REPLACED

“While our Baylor men are across the sea for the safety of democracy and womanhood, we Baylor women have before us a very definite work, and we must ‘Carry On!’” Thus ended an article on July 11, 1918, one of several Lariat articles aimed directly at Baylor University female students encouraging them to assist in the war effort during the United States’ involvement in World War I. As the male student population at colleges across the country dwindled due to the declaration of war and subsequent draft, women stepped up in a variety of ways to maintain the status quo on campus. Baylor women participated in both traditional and non-traditional methods of supporting the war effort and fostered a relationship with the soldiers stationed at nearby Camp MacArthur and Rich Field.

In April 1917, one week after the United States officially entered WWI, Baylor co-eds petitioned the university to offer a course in first aid skills. Female-only organizations such as the Calliopeans, Rufus C. Burleson Society, and the Young Women’s Christian Association hosted speakers who lectured on the importance of food conservation, the realities of war facing American soldiers “over there,” and the role of women in the war effort. Upon the creation of the Red Cross Auxiliary on campus, 225 co-eds answered the call to join on the first day, eager to volunteer their time and money. The Red Cross set up a workroom in Georgia Burleson Hall where women could sign up for shifts to make triangular bandages, knit sweaters, or assemble comfort kits. In just two months, Baylor co-eds contributed 310 bandages and 120 comfort kits towards the regionally assigned quotas in addition to donating $500 to the war drive. Even more directly, two former Baylor students, Gladys Cavitt and Roxie Henderson, served overseas as nurses in France and Great Britain, respectively. Young women at Baylor clearly lacked little in patriotic spirit and fervor.

Baylor co-eds also participated in the war effort in less traditional capacities as a result of the absence of a significant portion of the male students. In 1917 and 1918, the Lariat was run by a female editor and mostly female staff. Both the editor and associate editor of the 1918 Round-Up were also women. Female students took positions at the Baylor Press, which was vacated by several of the men and represented the “first women in this vicinity to take the places of men in industrial occupations because of their going to war.” A group of young women organized the “Kampus Police Force” in an effort to keep the campus clean, a job typically reserved for the male students. They carried trash baskets, hauled leaves, swept the grandstands before games, and kept the campus clean of scraps of paper and rubbish for twenty cents an hour, the same wages men would have received. The women used the wages they earned to purchase War Savings Stamps, or donated them to the Red Cross. Although most of these jobs returned to men at the end of war, the demands of the conflict provided unusual opportunities for Baylor co-eds to serve their country.

During the war, Baylor’s female students interacted with the soldiers housed at Camp MacArthur and Rich Field. Georgia Burleson Hall hosted soldiers from the camp for dinners and the administration allowed soldiers to attend the university’s social functions. Women from the Red Cross Auxiliary performed in conjunction with the band from Rich Field on May 3, 1918 at a benefit to raise funds for the organization.

From nursing soldiers overseas to rolling bandages and entertaining soldiers, the women of Baylor University demonstrated their patriotism and diligently contributed their “very definite work” to the war effort.

• Named after Lt. Gen. Arthur MacArthur, the camp was opened July 18th, 1917, to train men demobilized from service on the Mexican border at the end of World War I. It was in service for less than three years when it was abandoned on May 15, 1919.
• As well as a demobilization facility, Camp MacArthur served as an officer’s training school and an infantry replacement training camp.
• Located in northwest Waco, local businessmen helped to create a 10,700-acre complex from cotton fields and blackland farms.
• The estimated cost was five million dollars and included a base hospital, administration offices, tent housing for troops, and other military personnel buildings.
• The first commander was Major General James Parker who formed the 32nd U.S. Infantry Division later known as “Les Terribles” for their “successful, tenacious attacks” on enemy troops in Langres, France.
• The camp’s capacity could occupy over 45,000 troops but never exceeded 28,000 troops at a time.
• After the establishment of Camp MacArthur, the large influx of soldiers helped stimulate Waco’s economy until the Great Depression. The military presence also heavily influenced Waco’s Cotton Palace Exposition with an exhibit of a “bullet-ridden German biplane.”

Though The Texas Collection is strong in Texas-related holdings, the print collection contains a great number of volumes about other states, particularly the American West. Many of these volumes came to us as part of the Adams-Blakley gift. Enjoy these selections from Wyoming, Nebraska, and Colorado. 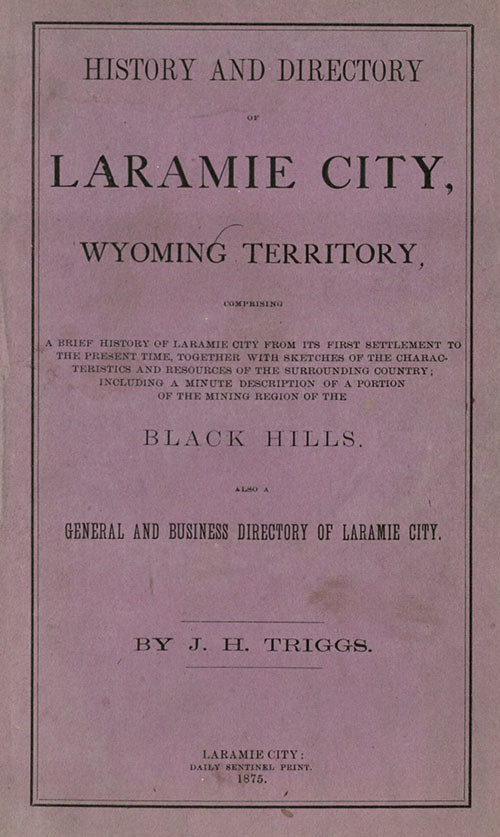 Researchers looking for the names, occupations, and addresses of those who lived in Laramie City in 1875 can find a wealth of information in this volume. Also contained are advertisements for local businesses and information about goods, services, and governance of this newly formed town. Click here to view in BearCat! 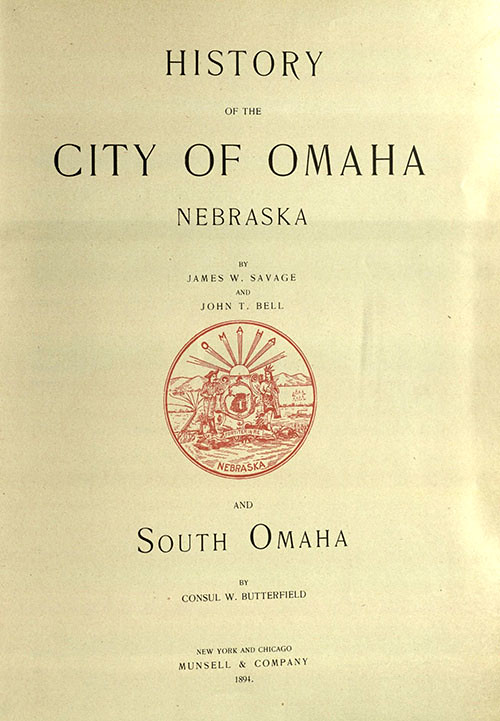 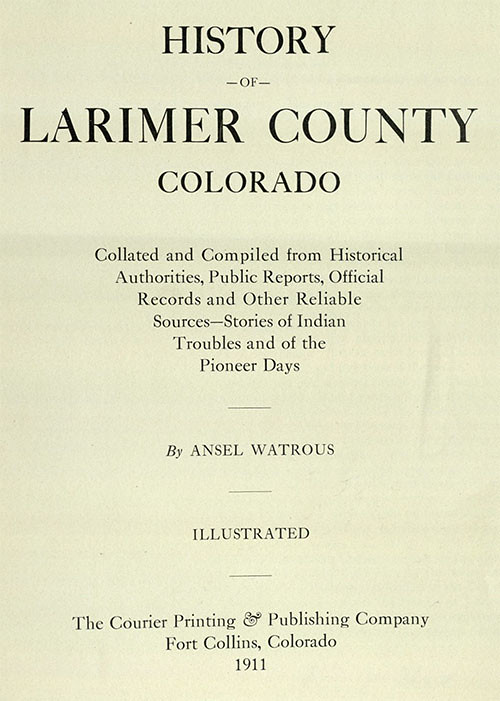 More than half of this volume contains biographical sketches of Larimer County pioneers. The rest is filled with historical, political, agricultural, religious information and more. Many photographs and engravings enhance this volume. Click here to view in BearCat!

On June 18, 1918, a troop train carrying soldiers from Camp MacArthur’s 80th Field Artillery left East Waco traveling eastward on the Cotton Belt line on a trip to a southern training camp. After traveling for 15 minutes (about 7 miles), the train derailed just north of Selby (no longer on the map). Two troops, Corporals Laurn Harrell and August Handschumacher, Jr., were killed, and about 30 military personnel and four employees of the railroad were injured.

In these photos taken by Edward Charles (E.C.) Blomeyer, of Waco, Texas, we can see the aftermath of the crash. Blomeyer was not involved with the railroad but rather was president of The Texas Telephone Company—while also pursuing amateur interest in photography. Blomeyer (1883-1964) lived in Waco from about 1912 to 1920. His collection of nearly 1,500 negatives and prints allow us to be an eyewitness to historical events that otherwise might be lost to time.

According to the Interstate Commerce Commission’s report on the incident, the train consisted of 14 passenger coaches, 6 freight cars, and a caboose.  Troop train no. 264 left East Waco at 3:25 p.m. and after traveling eastward about 7 miles and approximately 1.1 miles north of the town of Selby (no longer on the map), the train derailed at approximately 3:40 p.m. The locomotive was a Baldwin Consolidation-type, 2-8-0, #510, of the St. Louis Southwestern Railway of Texas, also known as the Cotton Belt line.

The derailment occurred as the train approached a trestle crossing the Tehuacana Creek. After an investigation by the Interstate Commerce Commission (ICC), and upon hearing statements from the train’s engineer, Statham, the agency came to the conclusion that a sun kink was the main factor of the accident. Sun kinks can occur during extreme heat causing rails to bulge or spread. At the time of the accident on this June day, it was reported to be 103 degrees.

Statham reported to the agency that the sun kink was “3 to 5 inches in width and about half a rail length long, located about 400 feet south of the trestle; he then set the air [brakes] in emergency and jumped.”

Another factor reported by the ICC describes the poor condition of the track: “this section was not properly supported by a ballast, and should not have been permitted to remain in that condition.” Based on the information, it was determined this resulted in the locomotive to begin its derailment 113 feet south of the trestle, causing the engine to turn over when it began to cross. A Waco News-Tribune account of June 19, 1918, states: “…at the time of the wreck [the train] was passing over a wooden bridge across Tehuacana creek. As the engine went onto the bridge timbers suddenly gave way and the locomotive ploughed through.”

The ICC determined that there were no mechanical problems with the Baldwin Locomotive #510. However, the arrangement of the cars made the event more tragic: during the derailment, the engine’s tender cistern became unattached from its frame, and unfortunately, directly behind it was the first passenger coach, which was made of wood. The wooden coach was practically demolished under the tender’s frame and tank, and the two deaths and many of the injuries occurred in this car. The ICC claimed that placing this lighter wooden coach behind the locomotive with the heavier steel cars behind it “undoubtedly increased the danger of injury to the passengers.”

After the incident there was much speculation as to the cause of the mishap. The June 19, 1918, Waco News-Tribune reported that: “The favorite opinion of the hundreds of officers, camp and railroad officials, and citizen spectators, was that the bridge or the rails had been tampered with, by persons knowing of the troop movement.” With the U.S. into its second year of involvement in World War I, it is not surprising that such theories of sabotage were being put forth.  Just a few days after the derailment, these theories were debunked by the investigation reports.

All of the above photographs were taken by Edward Charles (E.C.) Blomeyer, of Waco, Texas. See more of the photos from this accident in our Flickr album below:

Each month, we post a processing update to notify our readers about the latest collections that have finding aids online and are primed for research. Here’s the scoop for October: