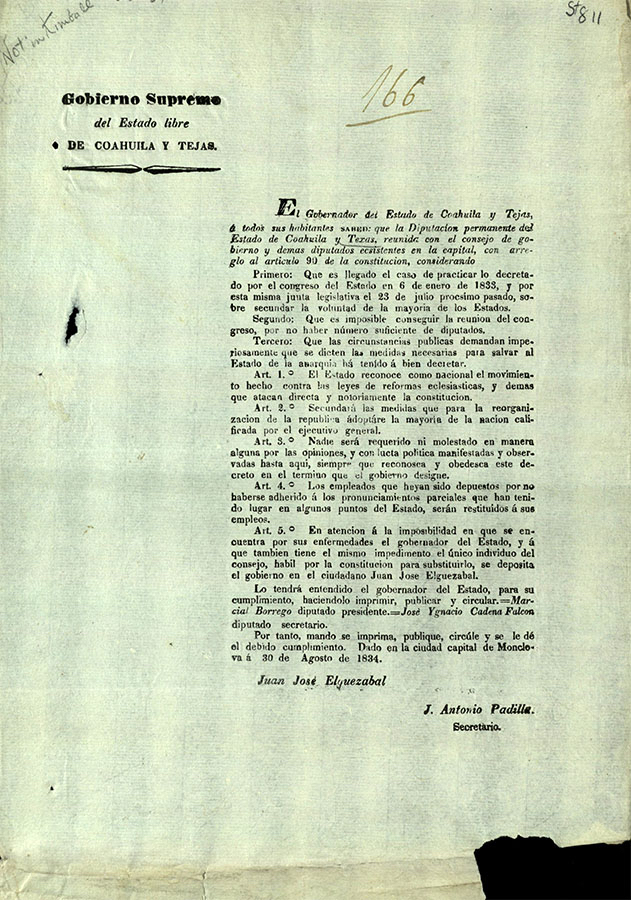 Coahuila and Texas (Mexico). [Decree of the Standing Deputation of Congress … Saying that the Present Governor, Vidaurri y Villaseñor, is Removed from Office because of His Infirmities and the Office Entrusted to Juan José Elguezabal … ]. [Monclova, 1834].

One of four copies located in the world, this rare broadside, another Streeter item, provides information on the replacement of a Coahuila and Texas governor in 1834. Click here to view the Bearcat record for this resource! 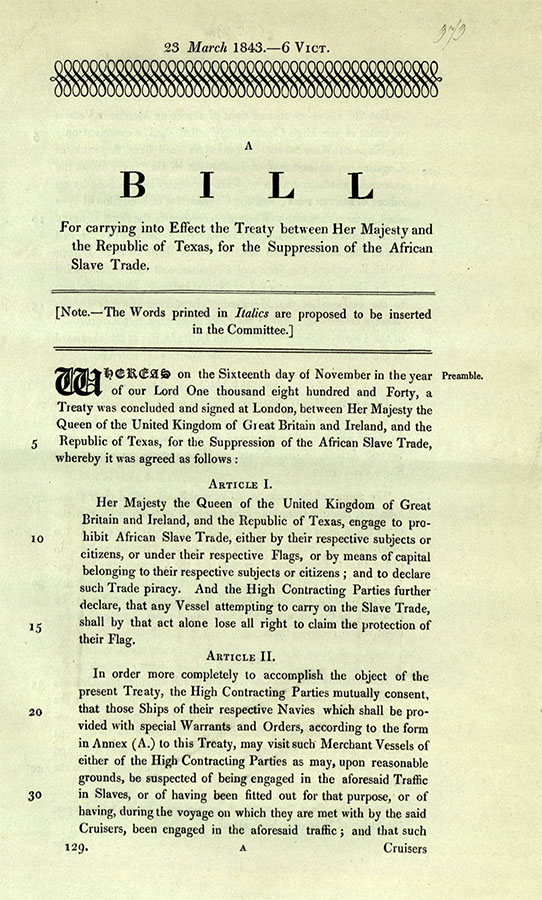 Great Britain. Bill for Carrying into Effect the Treaty Between Her Majesty and the Republic of Texas for the Suppression of the African Slave Trade. [London], 1843.

This rare item, found in Streeter’s Bibliography of Texas, 1795-1845, is located in three other institutions and is the only copy located in Texas. The treaty, one of three between Texas and Great Britain signed in November 1840, deals with the suppression of the African slave trade. Click here to view the Bearcat record for this resource! 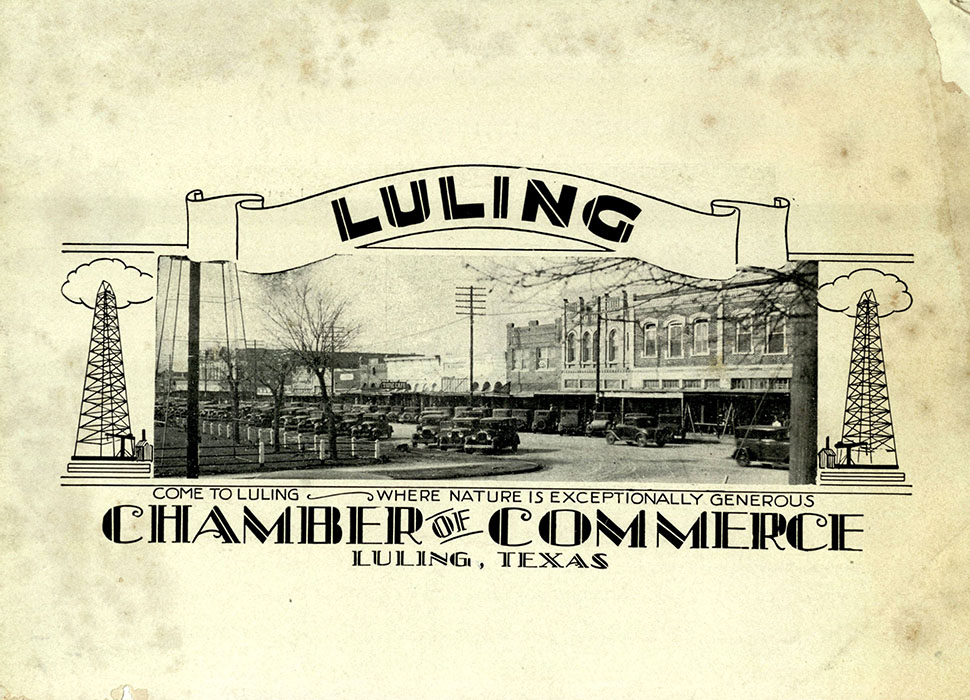 “Texas wants you and Luling is the place to locate.” Highlighting the best 1930s Luling has to offer as a way to entice people to move there, this promotional pamphlet provides an interesting view of this small town. Contained within are photos and information on the oil industry, agriculture, recreational facilities, schools, churches, and more. Click here to view the Bearcat record for this resource!

Upon leaving the CLC in 1987, Valentine continued to work diligently in Southern Baptist and religious agencies. His service in the Baptist Joint Committee of Public Affairs, from 1953-1961, 1974; and Americans United for the Separation of Church and State in 1969-1987, 1990-1997, are only two of the ten religious agencies that are reflected in his papers. Among the closest to his heart was the founding of the Center for Christian Ethics and the publication, Christian Ethics Today. As founding editor for CET, Foy was able to continue his vocation in Christian education in the ethics.

Fifty years ago, Foy made the following statement:

While the present age has brought the nation an awe-inspiring technological advance, a superabundance of material comforts, and greatly increased leisure time, it has brought no corresponding improvement in the moral condition of the nation. We are deeply concerned that more than ten million Southern Baptists have utilized so little of their potential to reverse the moral decline in America. ~Christian Life Commission minutes, 1964 (Foy Valentine papers, Series I, Box 3 Folder 2)

Foy worked for the betterment of the moral condition his entire life. Even today, his influence is evident in the recently created (2013) Foy Valentine Endowed Professorship in Christian Ethics in the George W. Truett Theological Seminary at Baylor University. In many ways, Foy Valentine has come full circle—he graduated from Baylor in 1944 and came back to Baylor with his materials now open and available to researchers. We invite you all to make use of these newly released papers. This collection will interest anyone studying religion, but especially those interested in Southern Baptist history.

“The mission of the Christian experience is expressed in the gospel of liberation, sharing the good news of what God has done in delivering his people from oppression. The gospel of liberation is rooted in the Judeo-Christian faith. It is an experience which is concretized in history. It is a happening, a living reality. This is good news for an oppressed people. God is the God of freedom, He participates in the historical process to liberate his people from oppression and bondage.” –Marvin Griffin, “Teaching Christ through the Black Experience,” 1973

On this 45th anniversary of the assassination of Rev. Dr. Martin Luther King, Jr., it is important to remember that there were many others who fought, and who continue to fight, at a local or regional level for African American civil liberties. One such warrior from the central Texas region was Rev. Dr. Marvin Griffin.

Marvin Collins Griffin was born in Wichita, Kansas, on February 20, 1923, and felt a call to ministry at the young age of seven. Education proved to be a powerful medium through which Griffin could equip himself to preach the gospel and fight for African American civil rights. Griffin earned his bachelor of arts from Bishop College in 1943, a divinity degree from Oberlin Graduate School of Theology in 1947, and a master’s degree in religious education from Southwestern Baptist Theological Seminary in 1955. That last degree was particularly noteworthy, because Griffin was the first African American to earn a degree from SBTS. Years later, Griffin would go on to attain a Doctorate of Ministry degree from Austin Presbyterian Theological Seminary.

Griffin used his quality education and his sense of calling to fuel his ministries. His first significant pastoral assignment was at New Hope Baptist Church in Waco. From 1951 to 1969, Griffin led his congregation in Christian and social activism. He began an extensive radio broadcast ministry and led various marches and pickets in Waco. The Marvin C. Griffin papers at The Texas Collection feature more than 1,500 audio recordings of his sermons and broadcasts, starting in the 1960s and continuing into the 2010s.

In 1969, Griffin relocated to Ebenezer Baptist Church in Austin, Texas where he remained for the next 42 years. Once again, Griffin believed that his church should be involved in the spiritual and secular life of the community. He led the church’s efforts in creating the East Austin Economic Development Corporation in 1998. This organization was a vehicle through which the church could assist the underprivileged through housing programs, day care centers, counseling, and financial assistance. In 2002, the EAEDC building was renamed in honor of Marvin Griffin.

In addition to his pastoral duties, Griffin was also involved in local politics and denominational affairs. He served as the first African American president of the Austin Independent School District Board of Directors, during which time the schools were using buses to encourage efforts of desegregation. Griffin was also involved in the Missionary Baptist General Convention of Texas, was the Director of the Christian Education Enrichment Program at the National Baptist Fellowship of Churches, and served as a Director-Lecturer for the Teacher Training Department of the National Baptist Sunday School Congress.

On July 31, 2011, Reverend Griffin retired from his tenure as pastor of the Ebenezer Baptist Church. Like Martin Luther King, Griffin devoted his life to preaching the gospel and empowering his peers to rise above the injustice of racial discrimination.

The Marvin C. Griffin papers, which have recently been processed, are now open for research. The materials therein provide an in-depth glimpse of Rev. Griffin’s pastoral ministries, his involvement within the Baptist denomination, race relations in the church and in central Texas, as well as the development of a liberation theology. This collection represents a treasure trove for researchers. Come on down to The Texas Collection as we celebrate the life’s work of a revolutionary in Texas race relations!

Learn more about Griffin’s leadership in Waco race relations in this article from the Waco History Project on his role in beginning the interracial Doris Miller Dialogue Group (DMDG) shortly after Martin Luther King’s assassination.

Each month, we post a processing update to notify our readers about the latest collections that have finding aids online and are primed for research. Here’s the scoop for March:

Each month, we post a processing update to notify our readers about the latest collections that have finding aids online and are primed for research. This month we have a few special entries from the Archival Collections and Museums class that worked on an archival processing project with us here at The Texas Collection. (You’ll learn more about that in a guest post by a student in January.) We’re not quite done proofreading all of the students’ finding aids, so there will be a few more finding aids coming from that group. Here’s the scoop for December: