This month, we are highlighting a selection of 16th century volumes recently discovered in our backlog and added to the collection. 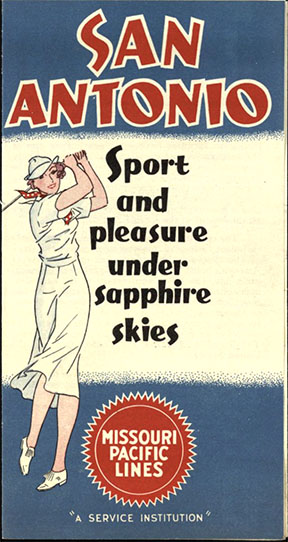 This small fold-out brochure provides enticing information on San Antonio as well as info on the Missouri Pacific Lines that service the city. Six photographs depict the cityscape, natural resources, and sporting. Click here to view in BearCat. 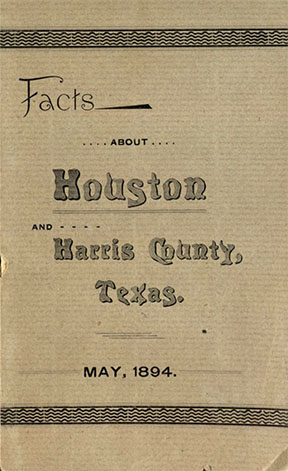 Porter explains why Houston, which at the time was nine miles square, is and will continue to be the most important city in Texas. The pamphlet includes many facts to support this claim including the number of water mains, artesian wells, churches, railway tracks, hotels, cotton compresses, etc. Click here to view in BearCat. 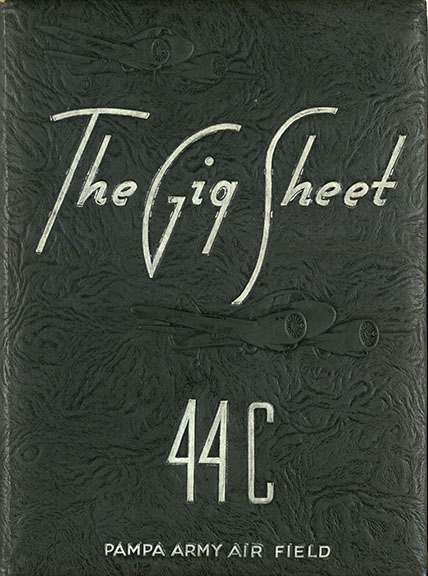 This Pampa Army Air Field Class 44-A yearbook highlights the day-to-day lives of pilots-in-training at the air field from April 22, 1943 to January 7, 1944. Click here to view in BearCat.

On June 18, 1918, a troop train carrying soldiers from Camp MacArthur’s 80th Field Artillery left East Waco traveling eastward on the Cotton Belt line on a trip to a southern training camp. After traveling for 15 minutes (about 7 miles), the train derailed just north of Selby (no longer on the map). Two troops, Corporals Laurn Harrell and August Handschumacher, Jr., were killed, and about 30 military personnel and four employees of the railroad were injured.

In these photos taken by Edward Charles (E.C.) Blomeyer, of Waco, Texas, we can see the aftermath of the crash. Blomeyer was not involved with the railroad but rather was president of The Texas Telephone Company—while also pursuing amateur interest in photography. Blomeyer (1883-1964) lived in Waco from about 1912 to 1920. His collection of nearly 1,500 negatives and prints allow us to be an eyewitness to historical events that otherwise might be lost to time.

According to the Interstate Commerce Commission’s report on the incident, the train consisted of 14 passenger coaches, 6 freight cars, and a caboose.  Troop train no. 264 left East Waco at 3:25 p.m. and after traveling eastward about 7 miles and approximately 1.1 miles north of the town of Selby (no longer on the map), the train derailed at approximately 3:40 p.m. The locomotive was a Baldwin Consolidation-type, 2-8-0, #510, of the St. Louis Southwestern Railway of Texas, also known as the Cotton Belt line.

The derailment occurred as the train approached a trestle crossing the Tehuacana Creek. After an investigation by the Interstate Commerce Commission (ICC), and upon hearing statements from the train’s engineer, Statham, the agency came to the conclusion that a sun kink was the main factor of the accident. Sun kinks can occur during extreme heat causing rails to bulge or spread. At the time of the accident on this June day, it was reported to be 103 degrees.

Statham reported to the agency that the sun kink was “3 to 5 inches in width and about half a rail length long, located about 400 feet south of the trestle; he then set the air [brakes] in emergency and jumped.”

Another factor reported by the ICC describes the poor condition of the track: “this section was not properly supported by a ballast, and should not have been permitted to remain in that condition.” Based on the information, it was determined this resulted in the locomotive to begin its derailment 113 feet south of the trestle, causing the engine to turn over when it began to cross. A Waco News-Tribune account of June 19, 1918, states: “…at the time of the wreck [the train] was passing over a wooden bridge across Tehuacana creek. As the engine went onto the bridge timbers suddenly gave way and the locomotive ploughed through.”

The ICC determined that there were no mechanical problems with the Baldwin Locomotive #510. However, the arrangement of the cars made the event more tragic: during the derailment, the engine’s tender cistern became unattached from its frame, and unfortunately, directly behind it was the first passenger coach, which was made of wood. The wooden coach was practically demolished under the tender’s frame and tank, and the two deaths and many of the injuries occurred in this car. The ICC claimed that placing this lighter wooden coach behind the locomotive with the heavier steel cars behind it “undoubtedly increased the danger of injury to the passengers.”

After the incident there was much speculation as to the cause of the mishap. The June 19, 1918, Waco News-Tribune reported that: “The favorite opinion of the hundreds of officers, camp and railroad officials, and citizen spectators, was that the bridge or the rails had been tampered with, by persons knowing of the troop movement.” With the U.S. into its second year of involvement in World War I, it is not surprising that such theories of sabotage were being put forth.  Just a few days after the derailment, these theories were debunked by the investigation reports.

All of the above photographs were taken by Edward Charles (E.C.) Blomeyer, of Waco, Texas. See more of the photos from this accident in our Flickr album below: