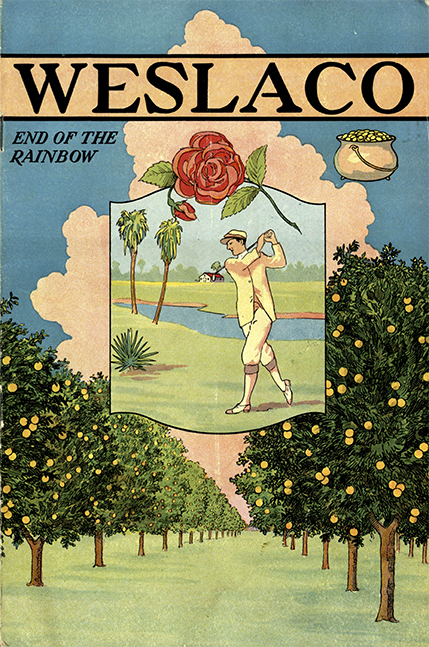 This beautiful promotional highlights Weslaco, located in the Rio Grande Valley. Filled with photographs showing the richness of agriculture, from citrus fruits to cabbage, Weslaco: End of the Rainbow, also provides information about the dairy industry, water, and sporting opportunities. Click here to view in BearCat! 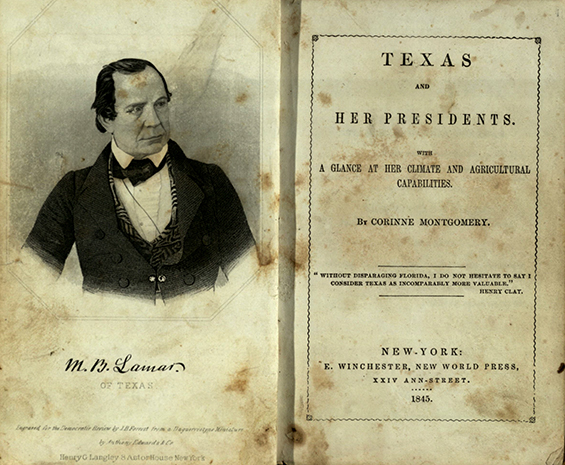 Located at only eight libraries in the world, this exceedingly rare 1845 volume highlights President Mirabeau B. Lamar and President Sam Houston. Also included is an extensive account of several other leaders of the Republic of Texas. Click here to view in BearCat! 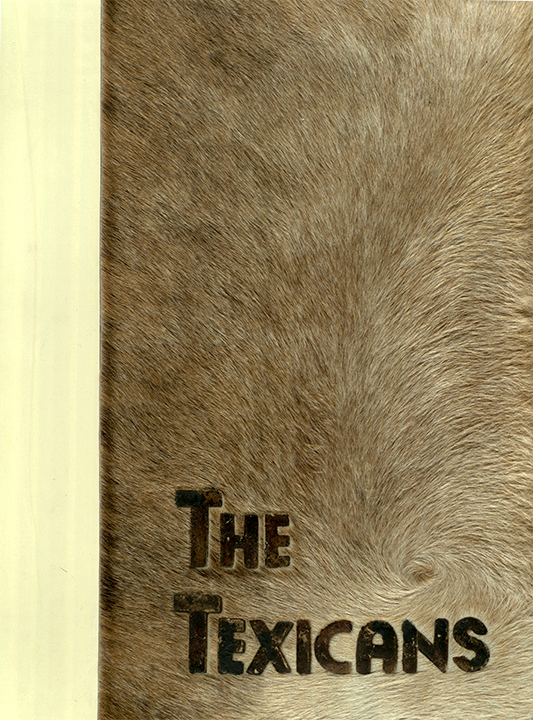 The name Pat Neff is known by every Baylor Bear. Perhaps his influence is most markedly demonstrated by Pat Neff Hall. Built in 1939 and named in honor of Baylor’s eighth president, its tower can be seen for miles and is a ready landmark for Wacoans and Texas travelers. But before Neff came to the Baylor presidency, he served the state of Texas in several offices, including two terms as Governor.

The Texas Collection is proud to house his papers and has been hard at work on processing his voluminous records (about 643 archival boxes). After a couple of years, multiple archivists and students, and generous gifts from Terrell Blodgett, among others, we have a completed finding aid for the Pat Neff collection.

The importance of these records can’t be overstated. They span a century of this important Texas family’s activities. Neff’s records offer a comprehensive view into the life and work of a public servant and educator.

And we do mean comprehensive—the man appears to have kept everything. Researchers, even those who know a lot about Neff, are bound to learn something they didn’t know. Here’s some of what you can discover, just from reading the biographical history in the finding aid.

Digging into the records themselves, you’re sure to learn much more about Pat Neff. We’ll highlight some of his records in upcoming blog posts and hope you’ll visit the reading room to explore Neff’s life and his impact on Texas and Baylor.

Read a book—The Land, the Law, and the Lord: The Life of Pat Neff, by Dorothy Jean Blodgett, Terrell Blodgett and David L. Scott.

Listen to a podcast—Treasures of The Texas Collection: Pat Neff, an interview with Hans Christianson, hosted by Mary Landon Darden.

Find out about an interesting discovery made recently in the Pat Neff collection—Bonnie and Clyde (and Pat) and The Texas Collection Artifact That Ties Them Together.

Contact us for more information about the collection—the front matter of the finding aid is online as a PDF, but the box listing is so intricate that it didn’t translate well into that format. An archivist can help point you in the right direction for your research on Neff and his contributions to Texas.

And check out a few of our favorite photos from the Pat Neff collection. There is much more where this came from!

Although intriguing, newspapers as historical sources can be problematic. As history’s “first draft,” mistakes are bound to happen. But as a way to gauge daily life, contemporary reactions, or to read accounts of major historic events, newspapers are invaluable primary resources.

With this in mind, one particular issue of a New York newspaper—the June 11, 1836 issue of The Albion—caught my eye as I began to inventory newspapers at The Texas Collection. To anyone familiar with Texas history, the year leaps off the page—surely events of the recent Texas Revolution would be mentioned! In fact, news of the battle of San Jacinto had been slowly filtering to the New York media.

When a major event happens today, reports are instantly available, but in the 1830s, communication was still very dependent on the mail. Most newspapers didn’t have correspondents to report on national and international events. Instead, travelers often wrote letters back to their local editors or, more commonly, editors received copies of newspapers from other major cities. In the case of The Albion in 1836, an account of the  battle of San Jacinto on April 21 had reached their offices through two New Orleans newspapers.

The account was a firsthand description of the engagement at San Jacinto, though unfortunately anonymous. The author describes the shock of the unprepared Mexican army as the smaller Texas force charged through their camp: “Some of the men were sleeping, some cooking, some washing, in short, in any situation but that of preparation for battle, when they were pounced upon by us at about 4 o’clock P.M. of the 21st.” The Texas fighters are described as shouting “The Alamo and La Bahía” (La Bahía being a common name for the location of the Goliad Massacre) in an early version of the now famous battle cry.

The description is very candid about the brutal close-contact fighting as the Mexican army fled. As the battle intensified, there was no opportunity to reload and firearms became clubs. Some heavy stocks were said to have been broken over the heads of the enemy. For all its intensity and political ramifications the battle was over quickly—just nineteen minutes before the Mexican army was routed. The author estimates that there were over 600 Mexican killed in the battle with only eight Texans killed. The casualty numbers in the account closely mirror Sam Houston’s official report (630 Mexicans killed and nine Texans), giving weight to its accuracy.

The United States was coming to grasp the battle of San Jacinto’s significance. By the date of this publication, the Treaties of Velasco had been signed and people began to speculate about Texas’ future. This was evident in the preceding pages of the June 11, 1836 issue of The Albion. A published speech by former President, and then current member of the House of Representatives, John Quincy Adams, addressed the “consequences” of the Texas Revolution. Adams strongly opposed Texas annexation, citing conflicts with Mexico and European powers, and an already unstable, ill-defended territory in the U.S. South. And so, of course, Texas did not become a state until 1845.

In a single issue among thousands of newspapers at The Texas Collection, I found an example of Texas history at its most dramatic. Enjoy San Jacinto Day this weekend!

Each month, we post a processing update to notify our readers about the latest collections that have finding aids online and are primed for research. Here’s the scoop for October: