Sometimes when working in a library, unexpected items cross your path. That was certainly the case with a document The Texas Collection acquired last year known as To Sisal. The To Sisal document is a mariner’s diary from the mid-nineteenth century, and the catalog the library purchased it from said it included an account of an overland journey to El Paso. When I began transcribing the diary, however, I realized the journey it described had nothing to do with El Paso, Texas; instead, it tracked the movements of a merchant ship in the Gulf of Mexico and recorded an overland journey across the Yucatan Peninsula. To Sisal provided several surprising episodes as well as new insights about trade in the Caribbean in the 1840s. 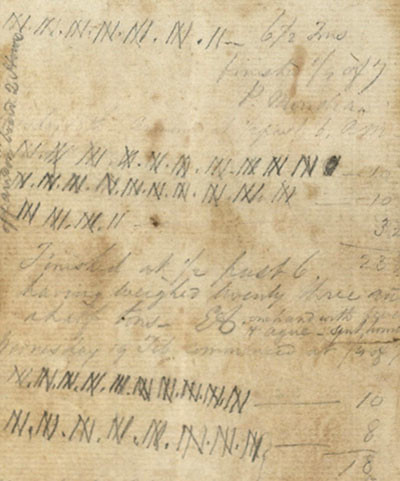 The mariner’s diary included short entries for a few months in 1844 and 1845, mainly about the weather and the ship’s cargo. The ship unloaded iron in the Yucatan to make room for logwood, which then sailed back to Europe. Europeans valued logwood for its ability to produce red dye for clothing. In the eighteenth century, one load of logwood brought in as much profit as an entire year’s worth of other cargo, up to 1500 pounds English sterling. The logwood trade remained lucrative in the nineteenth century, which explains the tally marks on several pages of the document. The mariner who owned this diary kept a meticulous record of the tons of valuable logwood loaded onto his ship.

To Sisal also included a comical event that occurred on board the ship. Two crewmen, Galloway and Davie, became drunk after consuming too much of the rum supply. Galloway became mutinous, so they tied him up, but Davie climbed up to the royal yard. The crew feared he would jump in his drunken state, but he made his way down and was tied up next to Galloway. After a few hours and several buckets of cold sea water, the two men sobered up, apologized for their behavior, and the crew continued with their work.

Part of the diary followed the owner’s overland journey across the Yucatan Peninsula, and his journey can be roughly traced on a map thanks to the specific details he gave. The diary recorded all the small towns between Valladolid and Merida that the group went through. Interestingly, there appears to be somewhat of a language barrier because the mariner spelled the names of the small villages phonetically, making it difficult to identify them on a current map. The mariner also mentioned crossing the River Lagartos, named after the crocodiles that infest the river’s waters. Crocodiles were just one of the many dangers associated with the logwood trade in the Yucatan.

Although To Sisal did not contain the overland journey to El Paso, Texas that we thought, it allowed us to see a glimpse into the daily routine of a mariner and trader in the mid nineteenth century. You just never know what you’re going to find here at The Texas Collection! 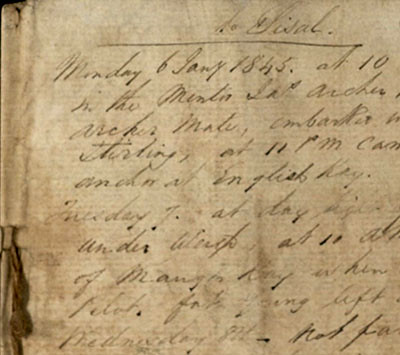