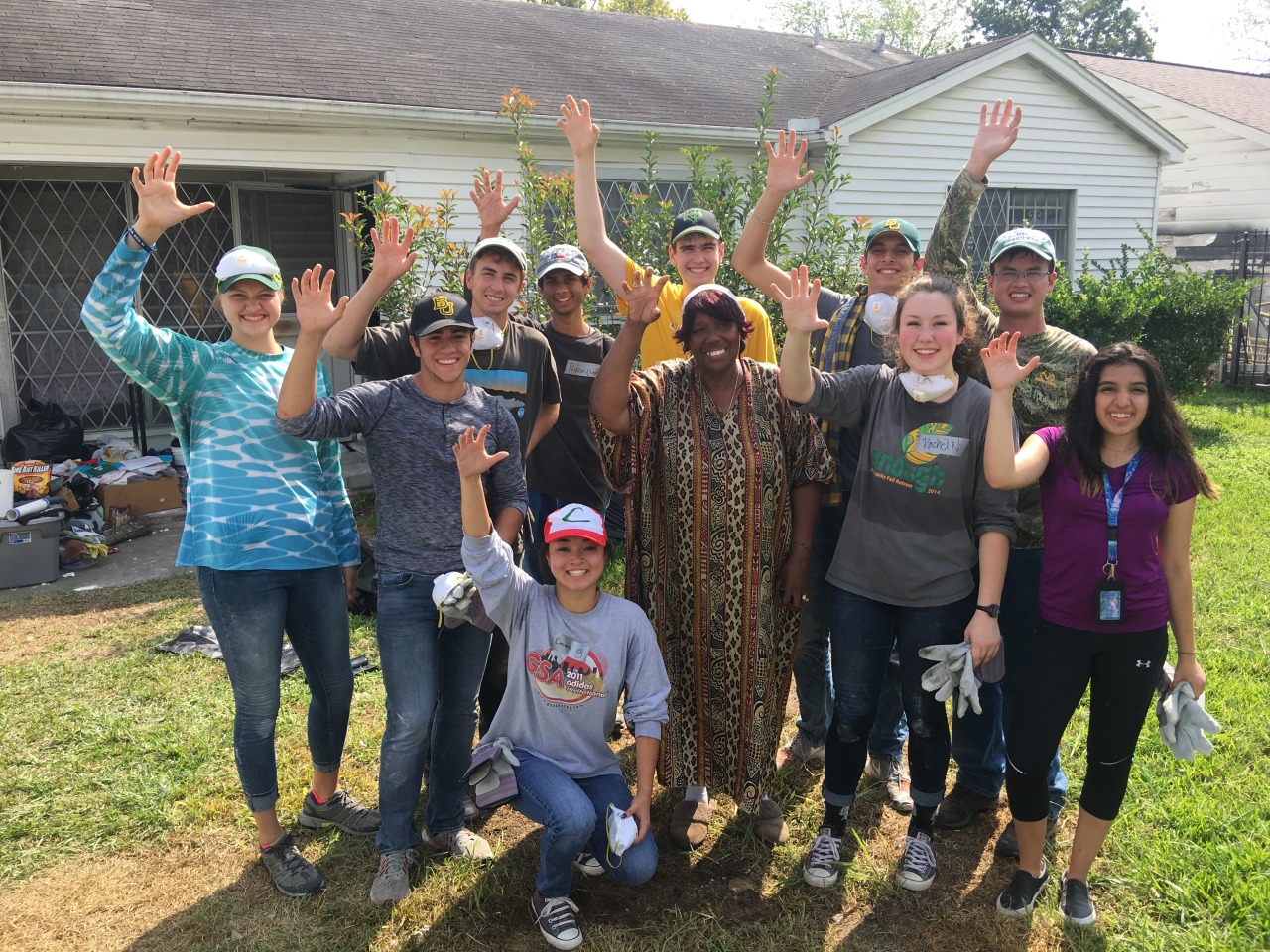 That seems to be the theme of the Harvey Relief Baylor Missions trip in Houston over Fall Break. When 50 students and 3 faculty members arrived in the neighborhoods of Houston, they described a strange volcanic-like ash that had settled over the lawns—sediment left behind when 4 feet of water receded after standing for 10 days. Debris cluttered the streets, giving the neighborhoods a sense of abandonment. Josh Lui, Electrical and Computer Engineering major, described the scene he saw upon arriving in a neighborhood in Houston:

“I went in thinking that months have passed and there can’t be much left to do for cleaning up, but I was genuinely surprised when we pulled into the neighborhood. The entire street was basically wiped out. All the lawns had patches of dead grass, trash was everywhere, houses were partially torn down, and siding of houses was ripped off. It was a melancholy atmosphere.”

Yet among the debris, there was life. People had returned to their homes, working and sleeping among what was left of their belongings.

“The lady we were helping out was in the middle of her living room sleeping on a pullout couch. All the walls were taken out, and she had condensed toward the middle so that we could work,” explained Ben Phillips, Humanitarian Engineering major. Ben and Josh are a members of Engineers with a Mission, an organization for students with an engineering mindset who want to use their skills and abilities to help other people. This group partnered with Baylor Missions for the Harvey Relief project.

Baylor Missions’ Jill Hatcher, Project Coordinator, organized and helped lead the trip after hearing the response from students ready to help. “Immediately following Hurricane Harvey, a number of students were ready to just get in their cars and drive down to the Houston area to start providing relief,” she said. “However, we are not trained or prepared to do that, because that requires things like water rescue.” But seven weeks later, Baylor students were ready to provide relief using skills they already possessed—or skills they could quickly learn. “We were very careful about the timing of this trip,” Jill explained. Fall Break provided the perfect opportunity for students to be of help to the ongoing relief efforts in Houston. “People were hanging dry wall, people were moving and cleaning out debris, doing things that they were capable to do because the time was right,” Jill added.

Much of the Baylor community felt the devastation of hurricane Harvey firsthand. For Josh Wells, a Houston native, Hurricane Harvey literally hit close to home. It added to the homesickness he was already feeling as a freshman adjusting to life in Waco. As he watched the event unfold, he kept thinking, “This is happening in my city and I’m not there.” Josh’s family has seen many floods sweep through Houston—to be exact, five in the last two years—but somehow their house has survived all of them. In August, the floodwaters were at his back porch but left no damage. However, about 70 families from his church, South Main Baptist, either lost their homes or were directly impacted. Knowing that so many others suffered the same fate, he felt a sense of obligation to get back to Houston over Fall Break and help out in any way that he could, deciding to join the trip. Josh’s church ended up housing the 53 members of the trip.

Photo of Wells’ neighborhood from the New York Times

Sophomore Raj Landry was moved to act in Harvey relief efforts because of the outpouring of support his family and the New Orleans community received after Hurricane Katrina in 2005. When Raj was a child, his family’s home was ruined by three and a half feet of standing water, taking months to repair all of the damage. Raj explained his experience of preparing for that hurricane and the worst-case scenario that no one expected:

“What a lot of people don’t realize about New Orleans and places like [Houston] is that when they tell you a hurricane is coming, it’s like when a fire alarm goes off: you assume something is wrong but you don’t actually think there’s a fire. They say there’s a hurricane coming, you board up your houses, you go to a hotel for the weekend, you get Monday off of school, and when you come back everything is fine. I remember thinking that it was going to be another one of those types of things. Nobody was prepared for that amount of devastation.”

Many people in the path of Harvey dealt with the same shock, unprepared for the devastation that took place. “Believe it or not,” Jill explained, “seven weeks later people are still reeling from the effects of the Hurricane. The recovery efforts in the Houston area are a long process. They are looking at months, if not years, to get things back to where they were.”

Yet through it all, there is a sense of gratitude and hope among the residents of Houston. Ben noticed that the people whose houses he was working on never complained, but gave their concerns to God. “They weren’t necessarily happy, they weren’t necessarily comfortable, but they just trusted God. They had so much faith after having no control,” he explained.

Many saw God at work in the midst of devastation, bringing renewed hope to Houston residents. Raj spoke with a homeowner who told him that the hurricane had actually brought back her faith. Seeing the outpouring of support and the community coming together was just what this homeowner needed to restore her faith in God’s goodness. “To me, that’s the church,” Raj said, commenting on all of the non-profits, communities, and people working together. “When you go like you’re called to do, that’s the church.”

Students with Houston homeowner and his artwork

Josh also noted hope in the midst of chaos. Rather than describing the atmosphere in Houston as “devastating” or “depressing,” he described it as “hope for the future.” One story that illustrated his point was of an artist whose house he helped work on. This man decided to paint what he saw upon returning to his home after the hurricane. “After a hurricane, in most neighborhoods the debris is so high you don’t even see the houses, you just see the piles of debris,” Josh commented. The painting depicts an American flag draped over the piles of debris in the neighborhood. But it’s no ordinary painting. “What impacted me about [the painting] is that the easel it’s on, the counter door the painting is on, and all the paint and the brushes—that wasn’t his. He literally found all of that in the debris.” This painting served as a sign of hope and restoration among destruction. Josh reflected on this, saying, “Even in our suffering, the Lord provides us with what we need.”

If you’re a student looking for ways to continue work post Harvey, check out BU Missions’ Hunger in Texas Spring Break trip, where students will get the opportunity to assess the effects Harvey has had on food insecurity in Texas.