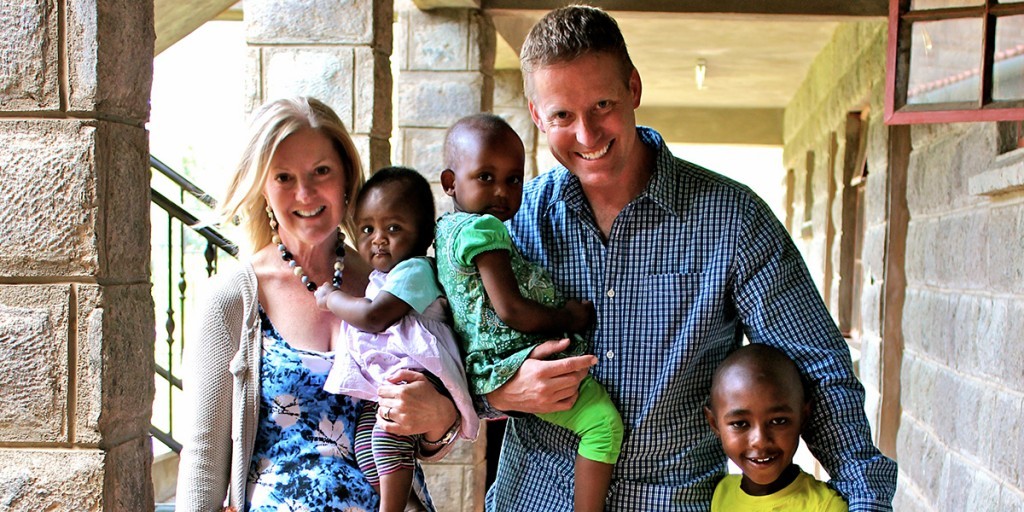 The Mendonsas are helping raise the next generation of leaders in Kenya. These Baylor alumi are the founders of Naomi’s Village, a children’s home that’s not your average orphanage. When they moved to Kenya full time in 2008, Bob (BU’88), a doctor, and Julie (BU’89), a teacher, had to rethink how the typical orphanage was run. According to UNICEF, 70% of boys who age out of orphanages end up in crime and 60% of girls end up in prostitution. While the average orphanage provides the basic necessities of food, clothing, and shelter for children who have been rescued off the streets in hopes of giving them a better future, in order to truly succeed, children need more. “There’s a lot that goes into changing the identity of a child who’s always viewed themselves as poor, as orphan, as victim,” Julie said. And the goal of Naomi’s Village is to do just that: to work redemption in the lives of their children, changing their identities to ones that are not orphans, but who have been rescued and who truly belong. 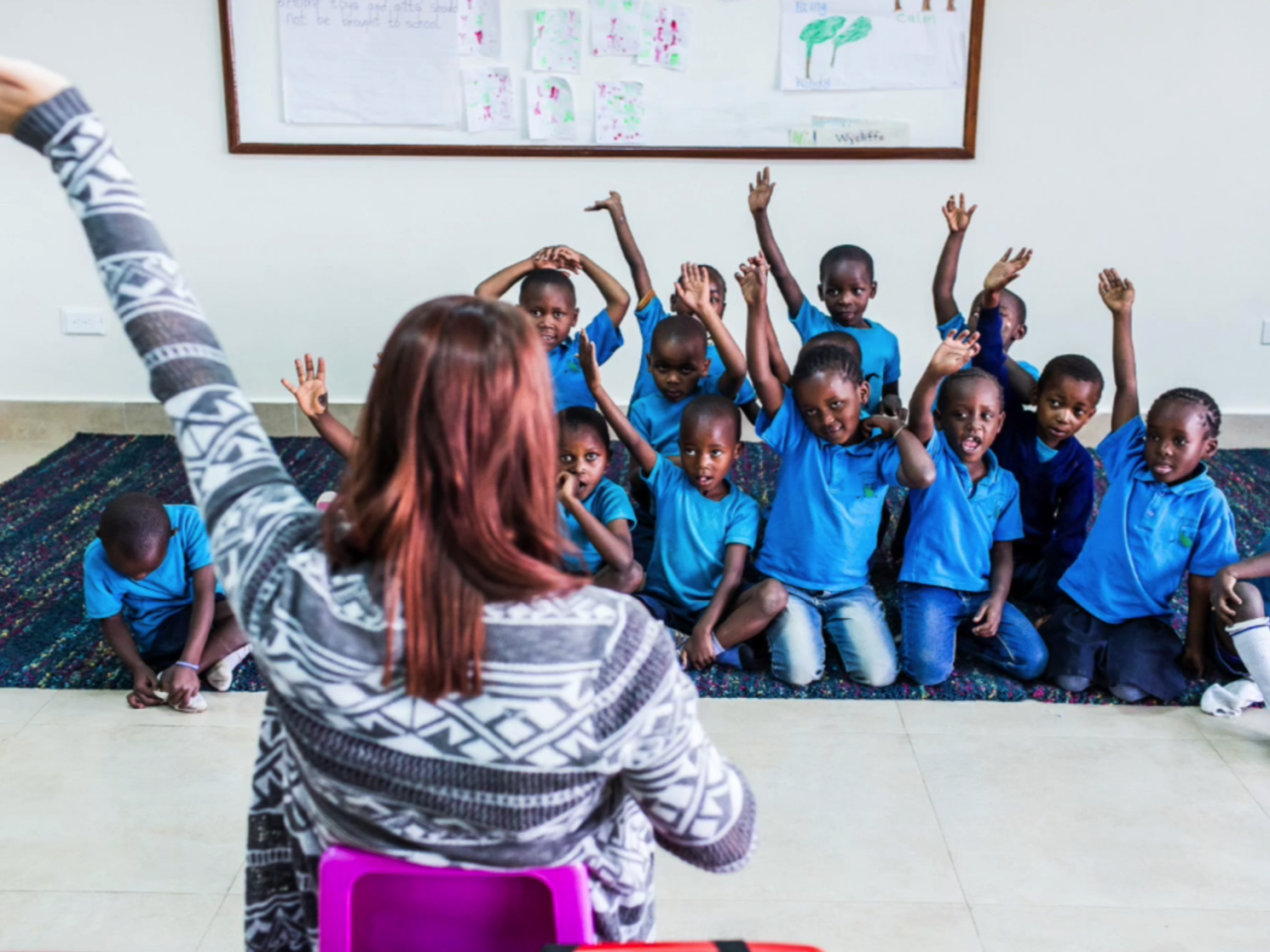 Bob and Julie met at Baylor as undergrads; Bob was Bio/Pre-Med and Julie was an Education major. After graduating, Bob went on to Med School and eventually joined a private practice. Their lives were orderly, predictable, and safe—until they became Christians. “We gave our lives to Christ and got baptized, and everything about our lives changed,” Bob said. About two years later, Bob was asked to go on a mission trip. After traveling to the Philippines and to Brazil, he said, “God really opened my heart and showed me so much about his purposes for my life outside of what I was accustomed to, which was this really organized, structured, safe, figured out life that I had as a private practice orthopedic surgeon.” At the time, Julie struggled with fear, not wanting to go on a mission trip with Bob. But after worship at church one day, something unexpected happened. Bob explained,

“We’re in church in 2002 and our pastor, after worship was done, stood up and went forward. He didn’t ever do this, it was something we’d never seen him do, and he didn’t know [Julie] wasn’t interested in going on a trip and about that tension that was there. He had us stand up kind of unexpectedly and said, ‘while I was worshipping I saw the two of you; you were ministering together, you were wearing safari clothing, you were in a warm, tropical climate. I saw you coming and going together, and I just felt like that was something the Lord wanted you to know.”

After this experience, Julie began to wonder if maybe God was calling her out of her comfort zone to take a trip to another country after all. These thoughts were confirmed when two weeks later, they received a phone call. “The medical director of Kijabe Hospital in rural Kenya asked if I would come work there for a month because the orthopedic surgeon was gone for a year and they were looking for people to cover,” Bob explained. Even more interestingly, the director described the climate of the hospital’s surrounding area not as flat, dry, and dusty—what people typically think of when they imagine African climate—but as a “warm, tropical climate” up in the mountains. So Bob, Julie, and their two children, who were four and five at the time, went to Kenya for a month.

During that time, Julie and their children, Emily and Will, decided to venture down into the Great Rift Valley. “This is really where everything about our lives started to change,” said Bob, “when Julie got out of her comfort zone and went and saw what was happening.” Leaving the hospital gave Julie the opportunity to see the everyday lives of those living in the Valley. “It was the first time that I had ever come face to face [with suffering], had been invited into somebody else’s suffering on that level,” Julie explained. “It’s one thing to see it in a picture or read somebody else’s story,” Julie explained, “but when you walk into it, all of your senses are engaged and it becomes real—they are real people and real families and real children.”

Julie saw firsthand how the AIDS epidemic in Kenya was destroying families and leaving children as orphans. “It just broke my heart,” Julie said, “I was just overcome with this orphan crisis.” Julie and Bob wanted to know the big picture of what was going on in Africa and discovered that the continent was in an orphan crisis. “There’s over two million orphans in Kenya alone,” Julie said. She offered a staggering statistic: “700 Kenyan children every day hug their parent for the last time, one every two minutes.” Julie said the Lord now had their full attention:

“Although I had never wanted to go to Kenya in the first place, at this point the Lord had my attention. I felt like he was just asking a very simple question, which ‘was what are you going to do with all of this now that you’ve seen and now that you know that these are real people?’ I told Bob, ‘I think the Lord is asking us are we going to say yes or no,’ so we said yes, not understanding and not knowing the fullness of what that meant at the time.”

God continued to affirm the work he was doing in their hearts. When they shared their desire to do something about the orphan crisis with some of their Kenyan friends, Julie said their friends responded with, “Well, imagine this, we have a five acre piece of land down in the Valley that we always thought would be used for orphan care.” This plot of land would become the home of Naomi’s Village. The Mendonsas moved to Kenya in 2008 and in January 2011 they opened Naomi’s Village and brought in their first child, Joshua, whose name means “the Lord saves.” The goal of Naomi’s Village is more than just keeping children off the streets: “It’s a home that’s meant to raise leaders,” Bob said. Bob and Julie believe the change that needs to happen in Kenya has to come from within. “God’s call to us was to raise an army of kids that become adults and take up this work and do it themselves,” Bob explained. In order to do that, he said, “We had to raise them with everything that you would raise your own child with, and constantly charge them, encourage them, and equip them with the call to do likewise.”

And they begin the charge to “go and do likewise” from a young age. The middle and older-aged kids go out every weekend to do ministry in their community. Bob and Julie hope to teach the children that not only have their lives changed by no longer being an orphan, but now their lives can work to change the lives of those around them. It’s a redemptive, hopeful, and life-giving work. 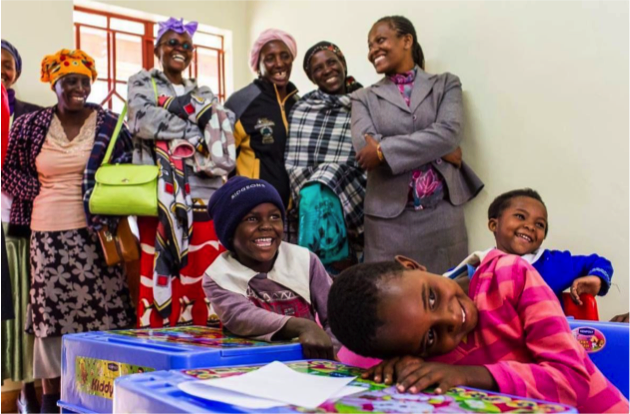 Staff and children at Naomi’s Village

Naomi’s Village is more than just an orphanage—it’s a home. The children are raised with the care, resources, and relationships that any child would have growing up in a traditional family. “Really what everybody needs is a sense of belonging,” Julie said. “Hope begins when a child belongs.”