This month’s story was contributed by Geoff Hunt, Audio and Visual Curator, The Texas Collection.

Katharine Cornell and A.J. Armstrong enjoy a moment of laughter on the dedication day of Armstrong Browning Library, Baylor University, on December 3, 1951. Cornell was the main speaker at the event, along with Baylor President W.R. White. Jimmie Willis photographic collection, 4×5 photo negative 1038.

While A.J. Armstrong’s stars included celebrities with little to no connection to the Brownings—his primary area of interest—some had very deep affiliations with the poets. In fact, a few of the stars played them!

Katharine Cornell visited Baylor twice, both times in relation to her role as Elizabeth Barrett Browning in Rudolf Besier’s play, The Barretts of Wimpole Street. The part became her signature role, one she started playing in 1931. According to her 1974 New York Times obituary, “The Barretts” ran for a year on Broadway, and then Miss Cornell shepherded her company on a 20,853-mile tour of the United States, a daring venture in the Depression…” Cornell was “actress-manager” for this performance, and her husband, Guthrie McClintic, was director.

Of course, Armstrong could not miss an opportunity to have this production come to Baylor, and the tour made a stop in Waco in 1934. In her obituary, Cornell is quoted saying, “‘The Barretts’ never played to an empty house—the receipts would be something like $33,000…so we came back having more than broken even. We really felt prideful.” Additionally, Cornell, along with Brian Aherne (playing Robert Browning), performed this production for servicemen and women during World War II in USO Camp Shows.

It was thus fitting that when Armstrong’s efforts came to fruition at the dedication of the Armstrong Browning Library on December 2 and 3, 1951, Cornell would be a part of the festivities. The library was a $2 million facility and called “a shrine to the poet, Robert Browning.” Armstrong stated it is “not far below the Taj Mahal in beauty.” For such a special occasion, the dedication called for a grand ceremony.

Well-known in the world of Browning enthusiasts, and those of the stage and Broadway, Katharine Cornell was the main speaker for the event. Waco Hall was the venue for Cornell’s appearance in what A.J. Armstrong called the “the cultural and literary dedication program” for the new Armstrong Browning Library. Although Basil Rathbone played Robert Browning in the 1934 touring production, Brian Aherne was the original Robert, “brought from his native England by Miss Cornell,” and he came with Cornell to the dedication.

On the day of the event, Ms. Cornell received an honorary Doctor of Laws during a dedication convocation. Aherne, as well as notable Baylor figures D.K. Martin, Marrs McLean, Herbert Dunnico, and A.J. Armstrong, received the same honor. Robert Roussel of the Houston Post, upon witnessing a portion of the dedication, commented: “It was indeed an inspirational day… All the humane arts were represented, and the theatre was as handsomely served as it could have been with Katharine Cornell and Brian Aherne as its messengers.” 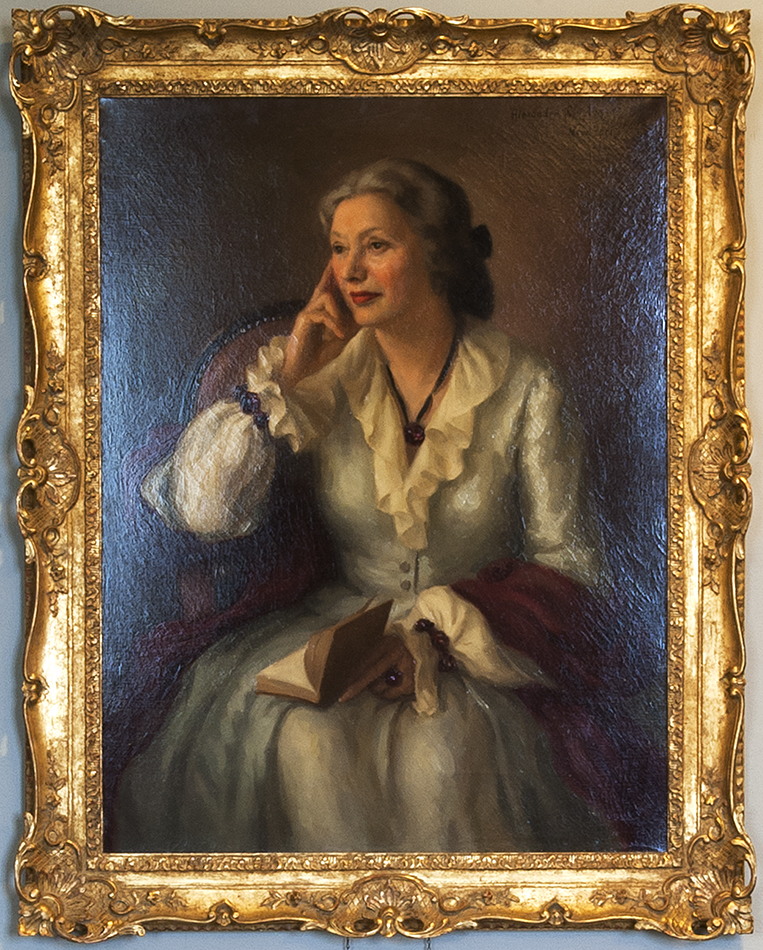 Roussell uses the term “messengers,” and Katharine Cornell rightly served the part as one for the Brownings’ legacy. That legacy lives on in the portrait that adorns the wall of the Armstrong Browning’s Austin Moore-Elizabeth Barrett Browning Salon, as well as her other donations such as the shadow box depicting a scene from the “Barretts” stage production. Further, her impact far beyond Baylor as “messenger” for Elizabeth Barrett Browning and Robert Browning in her role in the “Barretts” made many audiences more familiar with their poetic works while entertaining and bringing joy to many along the way.

Learn more about Armstrong’s Stars in previous posts, and see more photos of Katharine Cornell’s 1950 visit to Baylor in our Flickr slideshow below.